Happy Year of the Monkey! It's a Fire Monkey and the new lunar year has started off here in Wellington with really hot weather and even some bush fires last night! In accord with the fiery theme, this week's interview looks at art created through fire!

Meet Chris Dunn, a Wellington-based potter and ceramicist creating striking and colourful pots using pit-firing, a traditional technique that goes back to the earliest beginnings of pottery. Watch his interview video here to see the alchemy for yourself:

"The pots are given colour first of all by the fire, and secondly from other organic and chemical materials that are put either in the fire or around the pots before they're fired.
Different colours come from substances like salt, or seaweed, copper carbonate, copper scourer, sawdust, coffee grounds."

A member of the Wellington Potters Association (WPA), Chris first learned about pit-firing from fellow member and friend Francesca Costa who taught him her firing technique. Chris does his work there at the WPA clubrooms in Thorndon.

"Pit-firing can be done in a hole in the ground, a brick structure, or in a drum. I use a 44-gallon drum to do my pit-firing because I can move it and put it away afterwards. We're not allowed to have fixed fire structures at the clubrooms as it is on town-belt land.
We have a fire permit, so when we do a firing we have to ring the fire service to tell them."

There has to be a person in attendance while the fire is burning, which takes about 3 or 4 hours until there's nothing but hot ashes. It then needs to be left for at least 12 hours until everything has cooled down. If the pots are removed while they're still hot, the cold air will cause them to crack from thermal shock.


You can see the complete video of Chris's process of pit-firing here:

Chris says the main advantage of pit-firing is the amazing colouring that you get on the pots: 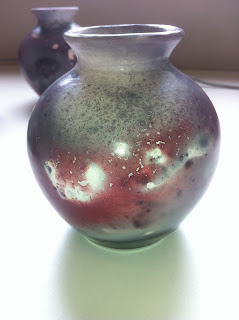 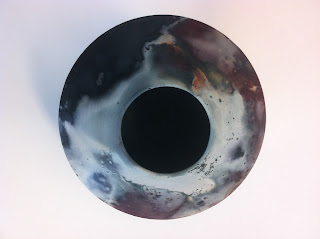 Other advantages of pit-firing are that it is relatively quick and easy, lots of fun and 'great if you happen to be a pyromaniac'.

"Some people would say that a disadvantage of pit firing is that the pieces aren't waterproof. Traditionally they were made waterproof by lining the pots with resin or gum. I could make my pit-fired pots waterproof but I think they're much better as they are. They are something very beautiful and artistic. I like the idea of pit-fired pots as decorative pieces." 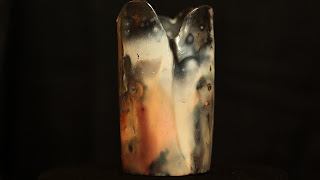 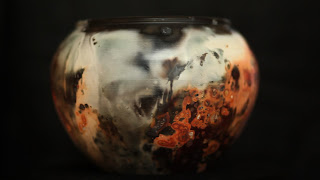 Chris started pottery in 1976. Originally from Sydney, he visited the West Coast of the South Island while a university student, and there met potter Hardy Browning. He returned to Australia but couldn't stop dreaming of returning to New Zealand, as he was captivated by both the country and the idea of becoming a potter. Eventually he wrote to Hardy to ask if he could come back and learn pottery from him, was accepted and returned to work as a full-time craft potter. A week after arriving back in New Zealand, he met his future wife Annabel.

The story of his mentor Hardy Browning, and his own journey to become a potter, is also very interesting:

"He had been a coal miner. When the coal mines were closing down on the West Coast in the late 1960's he was taught to pot by pioneering potter Yvonne Rust,  who was then the art teacher at Greymouth High School. She set up a class for redundant coal miners, to try to teach them to become self-sufficient craftspeople. Hardy was the one person who ended up completing the training and becoming a craft potter."

Chris took a hiatus from pottery to complete a post-graduate degree and has just recently returned to the craft in the last few years, luckily for us! He is working toward many exciting creative projects with his pottery, including lamp bases from his pit-fired pieces; multi-coloured decorative work with glazing (see above) similar to UK potter Tony Laverick's work; and landscape platters using Wellington harbour and New Zealand bush as themes. He would also like to start making casserole dishes again.

His dream is to be able to go to the south of France for an international craft festival and sell his work there.

"What I like best about ceramics and pottery is that you're learning all the time. It's totally engrossing. When you're doing it you don't worry or think about anything else.
I think that everybody should be a craftsperson, in some way or another.
Although quite a lot of craftspeople are crazy, they're actually relatively contented crazy people, or they have a way of expressing their craziness. And there are a lot of people out there who are not happy who probably would be happy if they could be craftspeople."

Chris told me that in the seventies there were over 5,000 registered craft potters in New Zealand, and that now there are less than 100. Wouldn't it be great if we began supporting locally-made craftware again instead of buying mass-produced, soulless pieces from factories overseas? 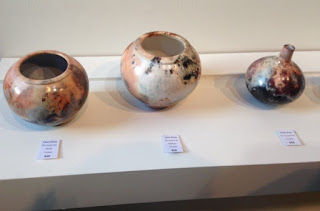 As well as selling his work in exhibitions Chris also sells his pottery at the New Zealand Academy of Fine Arts on Queens Wharf, Potocki Paterson Gallery in Dixon St, Wellington and NZique, a craft gallery in Petone.

For more information you can contact Chris by email at cdunn@ihug.co.nz.