One of the benefits of my work is that through every encounter with such interesting creators and their diverse projects, I get educated!

I have had the good fortune this week to talk with Pat-a-Cake Productions co-founder, Bop Murdoch about their latest production 'The Trickle Down Effect', part of Wellington's 2016 Fringe Festival. The show is a physical exploration of New Zealand's rising economic inequality using water as a metaphor. It really opened my mind about the critical state of the situation here in New Zealand, something I hadn't directly considered before, especially having just moved back to Aotearoa. Above is the video interview with Bop speaking about the production and current inequality crisis.

"Basically what's going on is that our rich are getting richer and richer and our poor are getting poorer and poorer. The situation globally is that sixty-two people own half of the entire world's wealth. Which means that the other half is split amongst everyone else - billions of people".

And thats not improving:

"Recent Oxfam statistics show that by 2020 about eleven people will own half the world's wealth. Obviously things have never been perfectly equal. But the 'We' society has definitely turned into an 'I' society".

"The sense that a lot of us got from our parents is that if you make all the right decisions, get a job and work really hard in that job then you can climb the ladder, get richer and you will be ok. And that you have an obligation to do that because no-one else is going to look after you.
That system is not working. There's this new class of people who are living in poverty but are working - the working poor. And that is leading to all kinds of situations that in New Zealand we really shouldn't be in".

"Our children are dying of preventable disease and our society's just becoming more and more divided. When you look at a living wage, in relation to what it costs to live, and how many people just don't have that living wage, it is clear the system needs to change". 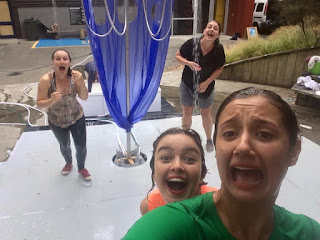 The show features actresses Trae Te Wiki, Ingrid Saker, Hannah Kelly and Sabrina Martin and the action is a result of deep collaboration based on their research into the economic situation and a synergy of improvised play.

"We delved into how the research was making us feel: sometimes feeling overwhelmed, sometimes quite anxious and fearful about our own situations, sometimes feeling guilty if there are things that we have that other people don't. And lots of readiness. Readiness to make changes, to reject the old paradigm that got us here and readiness for a 'conscious consumption revolution'. So what we did is we literally turned those feelings into moments of action that have shown up inside the show".

"One thing that we didn't expect to discover is just how much equality relates to the well-being of the entire nation. The social effects of an unequal society affects everybody so there's so much reason for even the wealthy to care about this issue. When you don't take action outside of your own neighbourhood or lifestyle then you lose a sense of what life is like for other people and that loss of empathy is really detrimental to our whole society".

Bop contacted author and journalist Max Rashbrooke (author of 'Inequality: A New Zealand Crisis') for advice on providing 'action pathways' for audience members to take away with them from the show, so they wouldn't be left in despair about the situation:

"He was very realistic and he said that that was great but really it comes down to the government making better choices about how to redistribute the wealth in New Zealand. His only other recommendation was that if you're in the position to pay people living wage then do so, because that helps to increase that bargaining power of the people. And he's really got his finger on the pulse.

"We can't make any changes unless people know more so there's a lot of inspiration to go and look it up and find out more and access this conversation rather than keeping on sweeping it under the rug".

Set designers Alana Inglis and Ashleigh Jenner were involved in rehearsals from the start of production, evolving the set along with the action.  Masters' graduates from the Vic Uni School of Architecture, Alana and Ashleigh trialled several different configurations, culminating in the final set.

Alana:
"We were inspired by the circle at the show's location, the Amphitheatre at 77 Fairlie Tce. Five showers were built, each with a different water pressure to highlight inequality. There are four showers for the four actresses, the fifth shower is representative of the 1% you never see - the person missing from the conversation. You never see those multi millionaires."

100% of the funding for the set came from the donations of friends and family through a Pledge Me campaign. The designers also used a lot of up-cycled materials:

"A lot of money is spent on building material in theatre and set design, which is used sometimes for just a week and then thrown away. We like the challenge of up-cycling. We had plywood gifted to us and plastic pallets from a construction site given to us for the floor."

Nice that the basis of the show is a solid foundation built from donations, sharing and reusing materials, perhaps symbolic of a new economic paradigm we can cultivate. 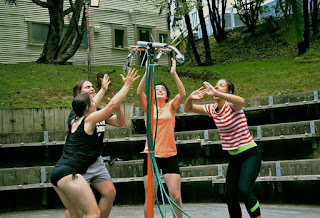 The show will be presented outdoors at the Vic Amphitheatre, 77 Fairlie Tce, from Thursday the 25th to Sunday 28th of February, with two shows daily at 3:30 and 5:30. You can get your tickets here.
The show features stage management by Catherine Hart, music by Finn Johansson and marketing by Sarah Tuck. Pat-A-Cake co-founders are Bop Murdoch, Sarah Tuck and Jody Burrell.

A great big thanks to Hannah Beattie Photography for the photos used here and in the video.

For ways you can move forward informed and positively empowered, here are some sites recommended by Bop:

"Oxfam have got their finger on the pulse when it comes to getting the right information.
One organisation that I love is Conscious Consumers. They have this great app that records where you spend, so you can find out which businesses are making ethical choices that you agree with and you can opt to spend your money there. Living Wage Movement is part of the change we need to be making.
Other great resources are 'Inequality: A New Zealand Crisis', the aforementioned book by Max Rashbrooke and the documentaries by Bryan Bruce".