This week I spoke with Laura Robinson, filmmaker and creator of the new web series BURBS which has been going off here in Wellington. A proponent of 'cowboy film-making' (yeah!) she and the BURBS crew are producing out-of-the-ordinary episodes each featuring a different suburb of the capital. Check out the interview video below:

While living in Aro, she started writing scripts about fictional characters dwelling in various parts of Wellington. She showed these to her friend Sevrin Noakes, a film school graduate who began to work alongside her on the series as director. The team grew as they were joined by other collaborators including Rosie Remmerswaal, Orion Holder-Monk, Patrick Hunn, Oscar Mein and Stella Reid.

Laura enjoys writing her characters with her actors in mind. In the episode 'Owhiro Bay', she wrote the role of a mermaid for her friend Ana Scotney:

"I wrote Ana's role for her. She's just a natural comedienne and I thought it would be great for her to do something challenging. I asked her to give me three different types of mermaids to play, a basic bitch-mermaid,  an animalistic-mermaid, and a really human-mermaid. After playing around with these ideas we incorporated all of these three into her character."

She creates realities where the absurd or surreal is taken to be a completely normal part of Wellington life. Like a guy going on a date with a mermaid who he met through online dating. Enjoying pushing boundaries, she explained that improbable situations that challenge our sense of what is real or normal can be more stirring than imagery such as nudity, extreme sex scenes or violence, which audiences have become somewhat desensitised to.

Laura's main inspiration for her writing process is to talk to her actors about character. An example of this is the episode 'Strathmore' which she co-wrote with Stella Reid.

"I wrote the first script, inspired about how you can't really be yourself in certain situations, like around family members for example, or when you go babysitting... for me those are personal experiences where you have to put on this persona of 'I've-Got-My-Shit-Together' kinda thing. And for a lot of people they can't express their sexuality."

She gave the script to actors Taufa Fisiinaua (who plays Coco) and Sonny Tupu (Junior) and gave them the floor with Stella, to improvise and explore where the characters would go with what was written. She wrote down everything they were improvising, using Taufa and Sonny's great chemistry to inspire the script, which she then rewrote for them.

"It's purely taking notes. I used to record the improvs but I think it's about writing notes... like if I'm watching and I get a shiver, then I write it down! 'Cos I think it's about instinct, about what you're seeing. Also improvising on the floor is quite interesting because you have to think in terms of filmmaking. Like, how does the action enter the frame rather than the space? I always saw that Coco's entry was to do with a lighter. That she would be holding a lighter, and it would come into frame. And that was the connection, through a lighter. Rather than, for example, a wide shot, where they both see each other.

"I really wanted them to improvise to make it more genuine. Because that was really challenging to write dialogue for two Pacific Island boys. I said 'Do you remember a school chant, from school?'. And they came up with that. You know, rhythm is such a huge part of their culture, and I would not be able to write that in!"

The response to BURBS has been really positive and supportive, with Wellingtonians showing great interest. Viewers are looking forward to seeing more of the series, and more suburbs. Local artists Kemi & Nico designed a little letterbox for the launch party, with postcards titled 'Secrets from the Burbs' onto which people could write personal anecdotes about their own shenanigans in the suburbs, sparking some fun creative ideas. 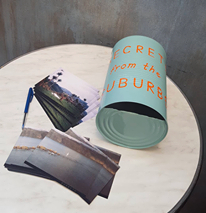 Currently self-funded, but with a lot of support from local businesses and communities, Laura hopes that BURBS will get sponsorship and funding to allow the team to continue creating their series.

When asked for any advice for novice writers she offered the following:

"A lot of writers tend to write quite dialogue-heavy stuff, but you can show a story through so many visual things. If you have the mute button on, will you still be laughing?"

"Just write! And if you're unsure about something, get your actors to improvise. It's amazing what actors will say. A lot of lines we have used in the series came from improv. And they're beautiful, beautiful lines."

"Trust people with your work!"

Using her laptop, Laura's preferred places of writing are outside (if it's not too sunny), in bed (if it's really cold), and on the kitchen table (though not with flatmates around, as she's embarrassed if they catch her talking to herself). The perfect inspiration is her flat in Melrose, as it has an awesome view with a panorama of Wellington.
Or maybe privately this cat book which I saw on her floor. 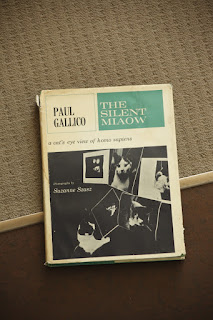 You can check out the BURBS project on their website and their FB page which includes links to the other online episodes. Episode 5, 'BROOKLYN' (my 'burb!) will be released on Sunday!

Thanks Laura and good luck to the BURBS team!